Rhetoric escalates between Shelby and Brooks

Richard Shelby in an interview implied Mo Brooks is irrational. Brooks responded by suggesting the veteran legislator is a creature of the “Swamp.” 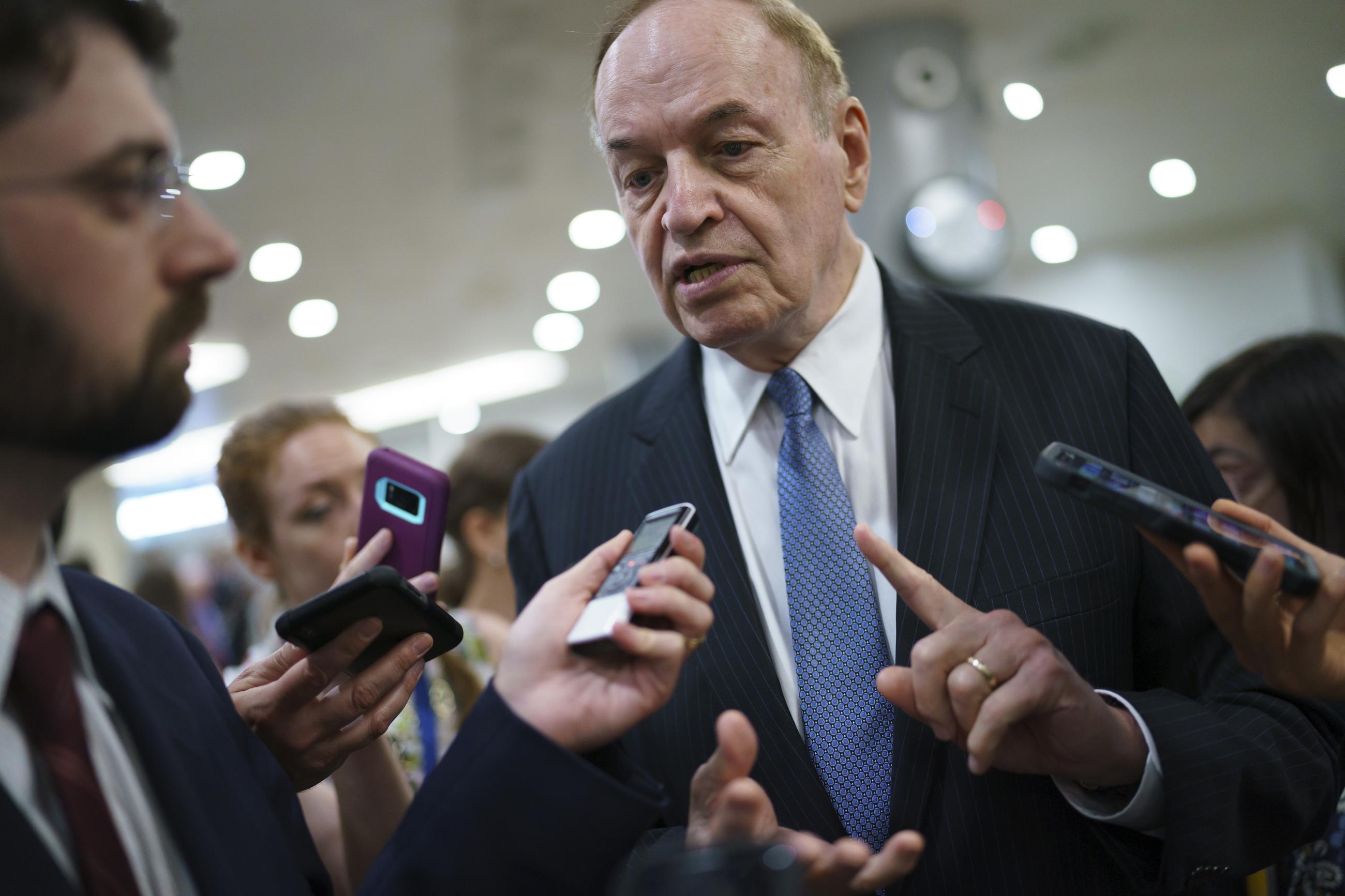 The Alabama GOP will hold its third Senate primary in four years next year, and the early contours of the race indicate that this one might be just as bruising as the previous two.

Former President Trump has his hand in every facet of Republican politics, yet in one of his top-performing states, his preferred Senate candidate is far from a lock to secure the nomination. In Alabama, Trump has endorsed Rep. Mo Brooks to succeed retiring Sen. Richard Shelby—who has endorsed his former chief of staff, Katie Boyd Britt, instead. Now, with Trump fanning the flames, Brooks and Shelby find themselves in conflict.

Last week, Trump sent a statement through his PAC calling Shelby a “RINO” while asserting that nobody was interested in a Britt candidacy. In a brief interview with National Journal last week, Shelby said that Brooks is “feeling the momentum” of Britt’s candidacy.

“Katie’s really just getting started. They’re showing a lot of interest, and they’re probably nervous about it,” he said of her opponents, adding that he’d help her campaign “everywhere I can.”

Shelby described Britt as “highly qualified” and “a very rational person.” When asked in response if Brooks would conversely be an irrational senator, Shelby said: “A lot of people would think so. Look at his record.”

Brooks sent an email to National Journal pushing back on Shelby’s comments.

“I get that Richard Shelby wants to bequeath Alabama’s Senate seat to his former, relatively inexperienced employee. But U.S. Senate seats should never be inherited or bought, they should be earned and decided by the people of Alabama,” Brooks said. “In any event, ‘rationality’ and ‘irrationality’ are in the eye of the beholder. I am 100% certain that, to Washington’s Swamp and special interest groups who routinely buy Congressmen and Senators, I appear very irrational because I put America First and special interest groups and their Swamp money dead last!”

He went on to criticize Shelby for writing in a Republican candidate in the 2017 special election, and defended his vote against certifying the 2020 Electoral College vote. Shelby chose not to vote for Republican Senate nominee Roy Moore after Moore was accused of sexual misconduct with underage girls, and Democrat Doug Jones believes Shelby’s non-endorsement of Moore helped him in his upset win.

“On January 6, I considered it rational to join ALL six other Alabama Republican Congressmen and Senators in voting with [Trump] and against the electoral college submittals of Arizona and Pennsylvania,” Brooks continued. “Richard Shelby had the right to be, and was, the only Alabama Republican to vote with Joe Biden. I respectfully disagree.”

When reached for comment, the Britt campaign referred to the statement that she had made after Trump released his statement, in which she called her opponent “panicked” and maintained that she wouldn’t “be a rubber stamp for anyone.”

Sen. Rick Scott, chairman of the National Republican Senatorial Committee, told National Journal on Wednesday that he’s not concerned about the prospect of a negative primary in Alabama.

“I think we’re going to get a great candidate out of it,” Scott said. When asked if he had a preference in the primary and to respond to Shelby’s remark about Brooks, Scott responded, “I like Republicans.”

Sen. Tommy Tuberville, a freshman Alabama Republican who remains neutral in the primary, told reporters last week of Trump’s endorsement of Brooks: “It’ll make a difference. It sure will. Be hard to beat.”

Republicans are always heavily favored in Alabama, but Trump’s history with the state sets him apart. In 2015, Trump held one of the first mega-rallies of his campaign in Mobile, with 30,000 supporters turning out for him. Jeff Sessions, who would later be appointed attorney general, was the first senator to endorse him.

After Sessions left his Alabama seat to serve as attorney general, Trump endorsed Luther Strange, who was appointed to serve the rest of Sessions’s term, for the special election. Strange lost to eventual nominee Moore in a runoff after Brooks was eliminated. Moore went on to lose to Jones, who served the rest of Sessions’s term before Tuberville defeated him last year. Sessions tried to get his old job back, but after he recused himself from the Russia probe, Trump endorsed Tuberville.

One Alabama GOP political veteran pointed out that constitutional offices will be on the same ballot as the GOP primary, meaning that the primary electorate will look very different from the low-turnout primary in 2017. He also noted that while strong fundraising is ideal, it’s not decisive in campaigns, as dark money can pour into a state and cancel out any fundraising disadvantage a candidate might have.

Though once critical of Trump, Brooks secured Trump’s endorsement largely because of his embrace of the former president's conspiracy theories. He spoke before Trump at the infamous Jan. 6 rally that led to the insurrection, telling the crowd, “Today is the day that American patriots start taking down names and kicking ass!” A photo of Brooks speaking to that crowd, wearing a red hat that says “Fire Pelosi,” is the lead image on his Senate campaign website.

While the Britt-Brooks beef has defined the race early on, there are two other candidates in the race, former Ambassador to Slovenia Lynda Blanchard and former House candidate Jessica Taylor. Blanchard has put $5 million of her own money into her campaign, and Taylor announced her candidacy on July 8.

The spot went up Tuesday.

It claims he “didn’t protect investors.”

Gun rights will be a key messaging point in the race.

The run-ins with financial fraudsters raise questions about his financial acumen.

The spot is running on TV and digital platforms.

He is scheduled to deliver remarks Monday.