Biden faces pressure from the Left to require Pfizer, Moderna, and Johnson & Johnson to share vaccine technology with manufacturers in the developing world, including COVID-ravaged India. 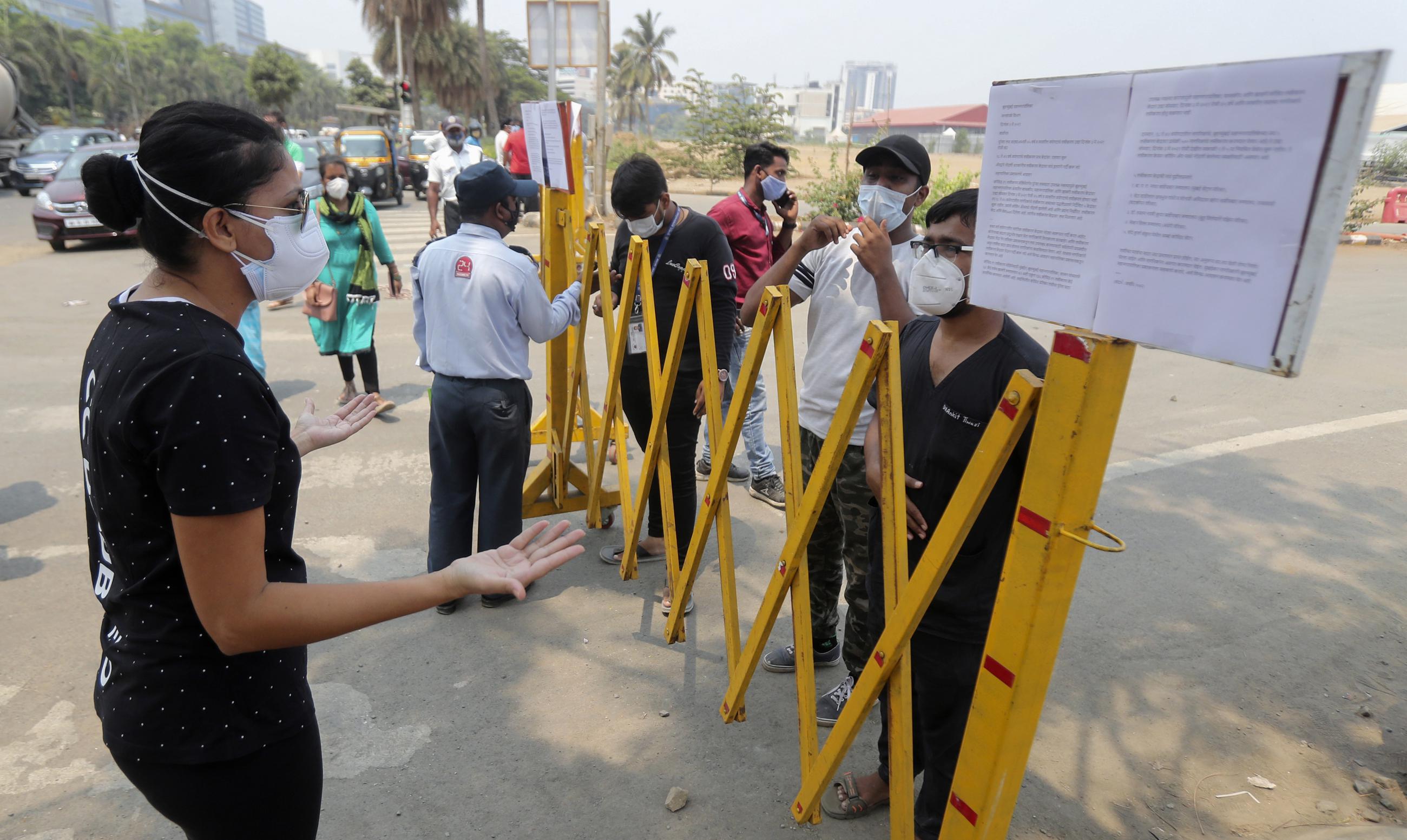 Progressive Democrats are pushing the Biden administration to temporarily waive intellectual-property rights on COVID-19-vaccine technology to speed up foreign production of the life-saving inoculations.

In October, India and South Africa led a group of countries in requesting that the World Trade Organization waive certain intellectual-property rights for COVID-19 diagnostics and vaccines on a temporary basis, but they were stiff-armed by the Trump administration and other countries that host the bulk of vaccine-manufacturing capacity.

The pharmaceutical lobby has lined up against the waiver, while progressives in both chambers urge President Biden to support it, especially in light of India’s spiraling COVID-19 crisis.

“[The IP rules] are going to severely restrict that capacity of the world to produce vaccines that are necessary,” said Rep. Ro Khanna, who spoke with India’s ambassador to the United States, Taranjit Sandhu, about the proposal last week.

Sandhu also spoke last Monday with Rep. Karen Bass, the head of the Foreign Affairs subcommittee on Africa and global health. Rep. Jan Schakowsky of the Congressional Progressive Caucus intends to release a letter this week in support of the waiver that has obtained over 100 signatures, according to Khanna.

“Congress has paid industry giants billions of taxpayer dollars to expedite research and development of COVID-19 vaccines and therapeutics. The American people deserve the best possible return on that investment, not corporate monopolies that restrict access and threaten to extend the length of the pandemic,” states an early draft obtained by National Journal.

In the Senate, Bernie Sanders, Elizabeth Warren, and eight of their Democratic colleagues urged Biden in mid-April to support the temporary waiver. Democrats also authored letters to Moderna, Pfizer, and Johnson & Johnson asking the companies about their efforts to share intellectual property with India, and the companies’ positions on intellectual-property restrictions more generally.

Administration officials have faced a deluge of questions about the WTO’s Trade-Related Aspects of Intellectual Property waiver in recent weeks, due largely to India’s focus on the issue, and the gravity of the country’s outbreak. The military last week began delivering U.S. Agency for International Development supplies to India, including oxygen cylinders, N95 masks, and rapid diagnostic tests, White House press secretary Jen Psaki told reporters.

Biden spoke with Indian Prime Minister Narendra Modi last Sunday, and Modi brought up “India’s initiative at the WTO for a relaxation in the norms of the Agreement on TRIPS to ensure quick and affordable access to vaccines and medicines for developing countries,” according to a readout of the call supplied by New Delhi.

Klain and other administration officials have referred questions to the U.S. Trade Representative Katherine Tai, who is supposed to make a recommendation to the White House. Tai has met in recent weeks with pharmaceutical executives, as well as international health philanthropist Bill Gates, the National Institutes of Health’s Dr. Anthony Fauci, and Seth Berkley of Gavi, the Vaccine Alliance, to discuss the waiver.

Tai also met with Schakowsky and seven other House Democrats on Friday.

Members of the special WTO body that handles TRIPS discussions met on Friday, but the minutes of the meeting were not made public. The USTR did not respond to a request for information about the hearing, or for a timeline on when the office would make a recommendation to the White House.

At the WTO, the TRIPS committee will need to make a recommendation to the General Council, which would have final authority to approve a waiver. The committee has not begun negotiations over the text of a potential waiver, however, due to private opposition from the U.S. and other wealthy countries.

“Public funding has been driving COVID R&D,” India’s WTO trade representative noted to the TRIPS group in December. “In addition, billions of dollars are spent on purchasing the vaccine. Given the demand volumes, pharma companies will anyway make profits. So why is there a need for IP as an incentive, in a global pandemic situation?”

Pharmaceutical executives, meanwhile, signed onto letters to Biden arguing against the waiver. They and other opponents argue that the patent protections are necessary to incentivize vaccine innovation and that the waiver will not help countries ramp up vaccine manufacturing.

“While we have manufacturers that are seeking to ramp up, we’re also continuing to see constraints in terms of access to raw materials as well as vials and syringes and the other ancillary materials needed to produce these vaccines,” Anne Pritchett, senior vice president of policy and research at the Pharmaceutical Research and Manufacturers of America, said in an interview Monday. “One of our concerns is that if suddenly we’re compelled to hand over our patents and reallocate staff time to try and get other manufacturers up to speed that don’t have the technical capabilities nor access to the global supply chains, then they’re creating more competition for these scarce supplies with no certainty these other companies can produce a safe and effective vaccine.”

Sen. Chris Coons, unlike his other Democratic colleagues, recently argued that intellectual-property rights are critical to vaccine development.

“If we were to simply open up to the world all of the IP at the core of these groundbreaking developments, I think we would then be at risk of losing the private-sector investment and development that’s critical to this moment of personalized medicine, of breakthrough vaccines, of breakthrough medical diagnostics,” the Delaware senator said at an event hosted by the Center for Strategic and International Studies.

Opponents of the waiver also argue that governments should explore other flexibilities under the TRIPS framework short of the waiver, like compulsory licensing, which allows countries to order domestic manufacturers under emergency circumstances to make a patented product without permission from the patent holder. Khanna said he believes that the threat of compulsory licensing might push Pfizer and Moderna to license their intellectual property voluntarily.

“And a country like India would pay for the voluntary license because they’d rather get the technical know-how and do it cooperatively than requiring a compulsory license. But the threat is what will incentivize Pfizer and Moderna to share,” Khanna said.

The U.S. has historically opposed compulsory licensing, but the Biden administration may be softening that stance. In a USTR report last week, the administration stated that the COVID-19 pandemic “certainly qualifies” as an emergency defined by TRIPS rules.

For advocates, the compulsory licensing regime presents other regulatory hurdles.

“That in itself doesn’t facilitate the sharing of technology and know-how that would speed up the amount of vaccine production,” said Katie Gallogly-Swan, policy coordinator at the Global Development Policy Center at Boston University.

Gallogly-Swan told National Journal that the need for the waiver is a symptom of a failure early in the pandemic to rally support for other programs besides the donor-based COVAX initiative. The WHO’s ACT Accelerator program, the parent program to COVAX, fell well short of its goal of delivering 100 million doses globally by the end of March, and on Monday, WHO director Tedros Adhanom said that the program was some $19 billion short on funding.

“We estimate that we will need a further $35 to $45 billion next year to vaccinate most adults around the world,” he said.

Other collaborative initiatives were proposed early in the pandemic but failed to gain traction, such as the WHO’s COVID-19 Technology Access Pool, which was intended to create a globally licensed pool of products for combating the virus. In mid-April of this year, the WHO began soliciting support for another initiative, the mRNA technology transfer hub, for mRNA COVID-19 technologies free of intellectual-property constraints.

“If we had gotten ourselves together and were able to meet the moment ... rather than deciding to hand over the patents to the companies who were going to be initially working with the public sector to get the vaccine production off the ground, then we’d be in a very different situation now,” Gallogly-Swan said. “The waiver is the consequence of the failure at that moment.” 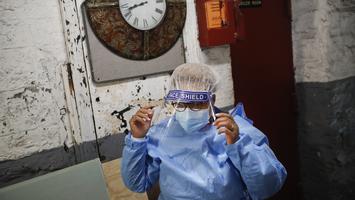 Lawmakers increased Medicaid funding for home and community based services in the last COVID aid bill, and advocates hope states will use the dollars to support the workforce. 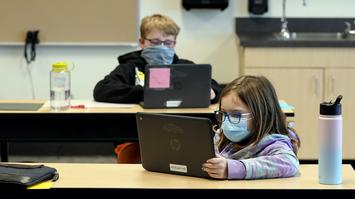 Pediatricians call on Biden to prioritize COVID vaccines for children

As more adults get vaccinated for COVID-19 and the country looks to reopen, pediatricians and advocates want to ensure that children aren’t forgotten. 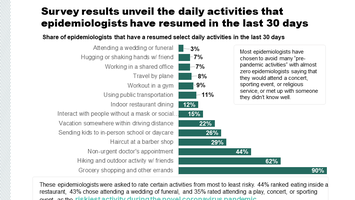 Daily activities during the COVID-19 pandemic by epidemiologists 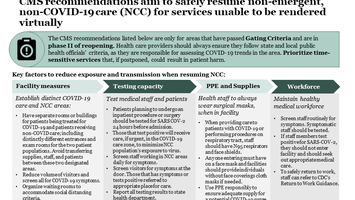 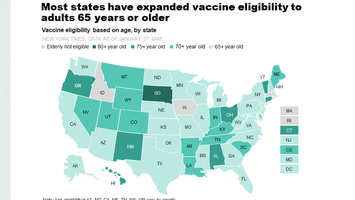 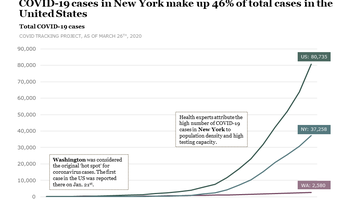