The House minority leader stuck by President Trump even after a mob stormed the Capitol, killing a police officer. It’s not only a morally bankrupt position, but a politically perilous one. 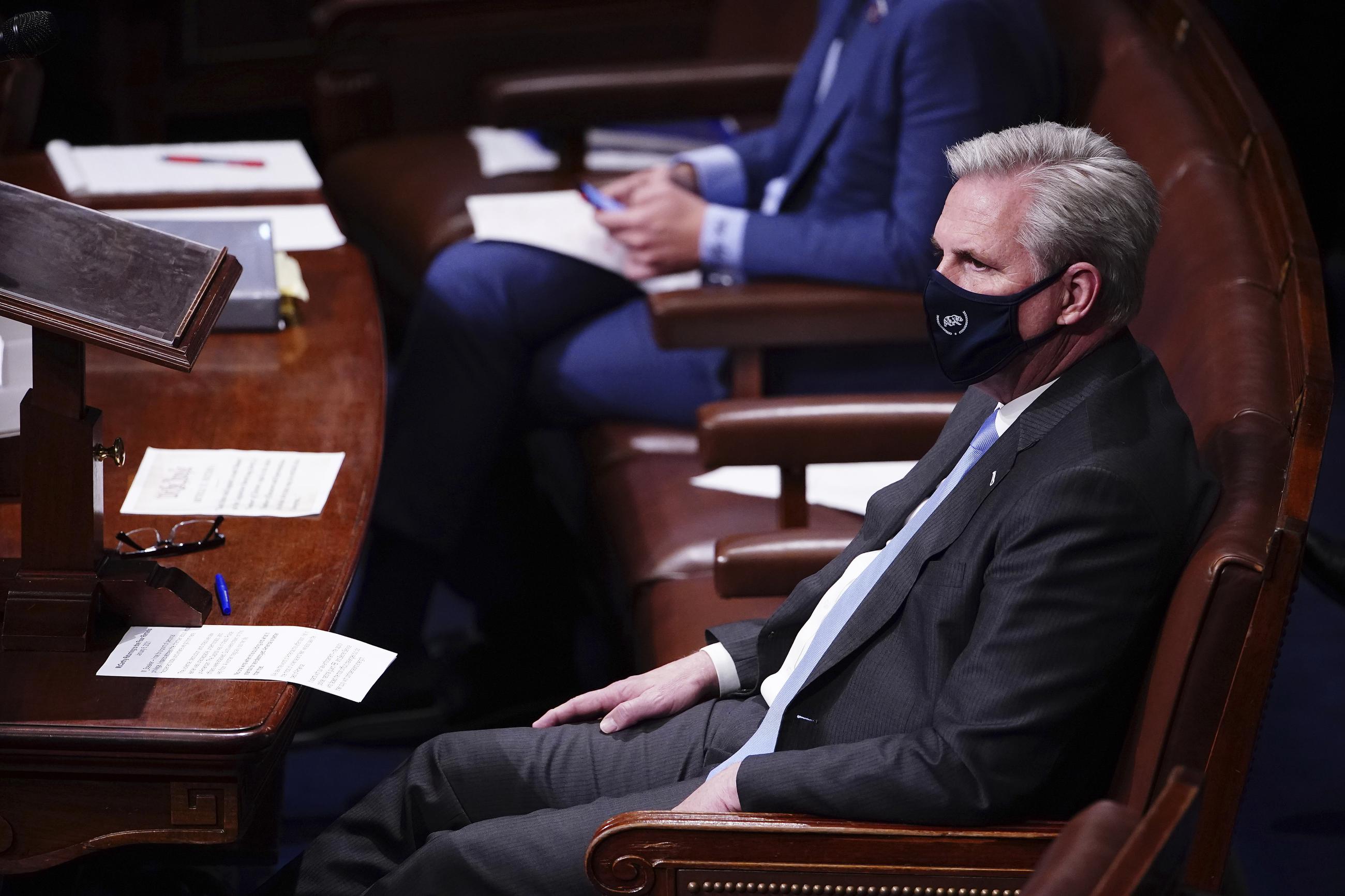 House Minority Leader Kevin McCarthy of California listens in the House Chamber after the body reconvened for arguments over the objection to certifying Arizona’s Electoral College votes on Wednesday.
(Jim Lo Scalzo/Pool via AP)

As the horror of Wednesday’s Trump-incited mob assault against the Capitol settled in, the last layer of the president’s Republican wall of institutional protection started to crack. Two of President Trump's longest-tenured Cabinet secretaries resigned in protest over his shameful actions. Senate Majority Leader Mitch McConnell, just after learning he’d lost his majority, reportedly told colleagues that he never plans to speak to Trump again. Only eight Senate Republicans ended up voting to challenge the electoral votes in at least one state, about half of the number who had originally pledged to join Sens. Josh Hawley and Ted Cruz’s nihilistic (and hopeless) mission to pander to the Trumpist base.

Even after Trump fomented terror against the very legislative body McCarthy represents, more than half of House Republicans voted to perpetuate the president’s dangerous charade. There was no attempt to unite the caucus by belatedly rejecting Trump’s insidious election denialism. Instead, McCarthy continues to bet on Trump’s continued dominance of the Republican Party.

As GOP Rep. Dan Crenshaw of Texas, a Trump loyalist who nevertheless voted to certify the election results, put it to his hometown paper: "All of the members who called for everyone to come and fight and make their last stand, all of those members were scattered like cowards while the Capitol Police had to do the fighting."

The list of Trump’s abettors in the House included some surprising names of freshman lawmakers who had prevailed in competitive districts, like California’s Mike Garcia (who won by one-tenth of a percentage point in a Biden district), Florida’s Carlos Gimenez (a onetime Trump critic who had pledged to govern in a bipartisan manner after winning a close race), Oklahoma’s Stephanie Bice (the up-and-coming leader of the GOP’s freshman class representing a purple suburban Oklahoma City district), and Texas’s Beth Van Duyne (whose district flipped from Trump to Biden). Even New Jersey’s Jeff Van Drew, a Democrat until 2019, cast his lot with the disgraced president.

The Cook Political Report’s Amy Walter calculated that 21 of the 40 Republican lawmakers representing the most competitive GOP-held districts voted with the president. For many of them, that will be a career-defining vote, a bet on Trump’s long-term dominance of the party at his lowest political moment.

Advisers to several freshman Republicans said that the lawmakers were genuinely torn over how to approach the vote, receiving little guidance from leadership other than a sense that McCarthy wanted them to stick with Trump. He reminded even swing-district colleagues that they could face primary threats if they crossed a vengeful president. Little changed after Wednesday’s attack on the Capitol. “There was no semblance of leadership that simply told them, 'You have to vote your conscience on this vote,'” one adviser said.

Like Hawley and Cruz, McCarthy has concluded that Trump will remain a force within the GOP even after egging on riots that left five Americans dead, including a Capitol Hill police officer. Regardless of the politics, it’s a morally bankrupt position. But it’s also coming at a time when the intra-party politics are shifting away from the president, and anti-Trump Republican forces have political cover from leading figures like Vice President Mike Pence, House Conference Chair Liz Cheney, rising stars like Crenshaw, and some of the most hard-line conservatives in his own caucus.

McCarthy clearly fears the prospect of Republicans getting primaried out of office without showing due deference to the president. But he doesn’t appreciate that his members have power in numbers. Unlike senators who can easily get singled out by Trump for disloyalty because of their higher profiles, most representatives benefit from the cloak of anonymity. The threat of House primaries after Trump leaves office are overstated: Rep. Adam Kinzinger, despite being an outspoken critic of the president, didn’t even face Republican primary opposition in his conservative Illinois district last year. And it’s not as if Republicans haven’t split with Trump on critical votes: Most voted to override his veto of the defense-spending legislation and rejected his calls for a $2,000 stimulus for individuals.

Time will tell whether McCarthy pays a political price for his political cowardice. He was coming off a successful election, with House Republicans benefiting from a Trump-fueled turnout surge while maintaining enough support from more-traditional Republican voters to wildly beat expectations. His party is within striking distance of the majority in two years. But the GOP is also splitting apart, with a growing number of Republican officials backing a complete break from Trump after this week’s events. That split is forcing Republicans to choose between democracy and Trump. If the institutionalists prevail in the looming GOP battle for the soul of their party, McCarthy will rue the day he chose to stick on the Trump ship until the bitter end.