Violence comes to the Capitol

What was already supposed to be a day of bitter, partisan fighting turned into something more disturbing. 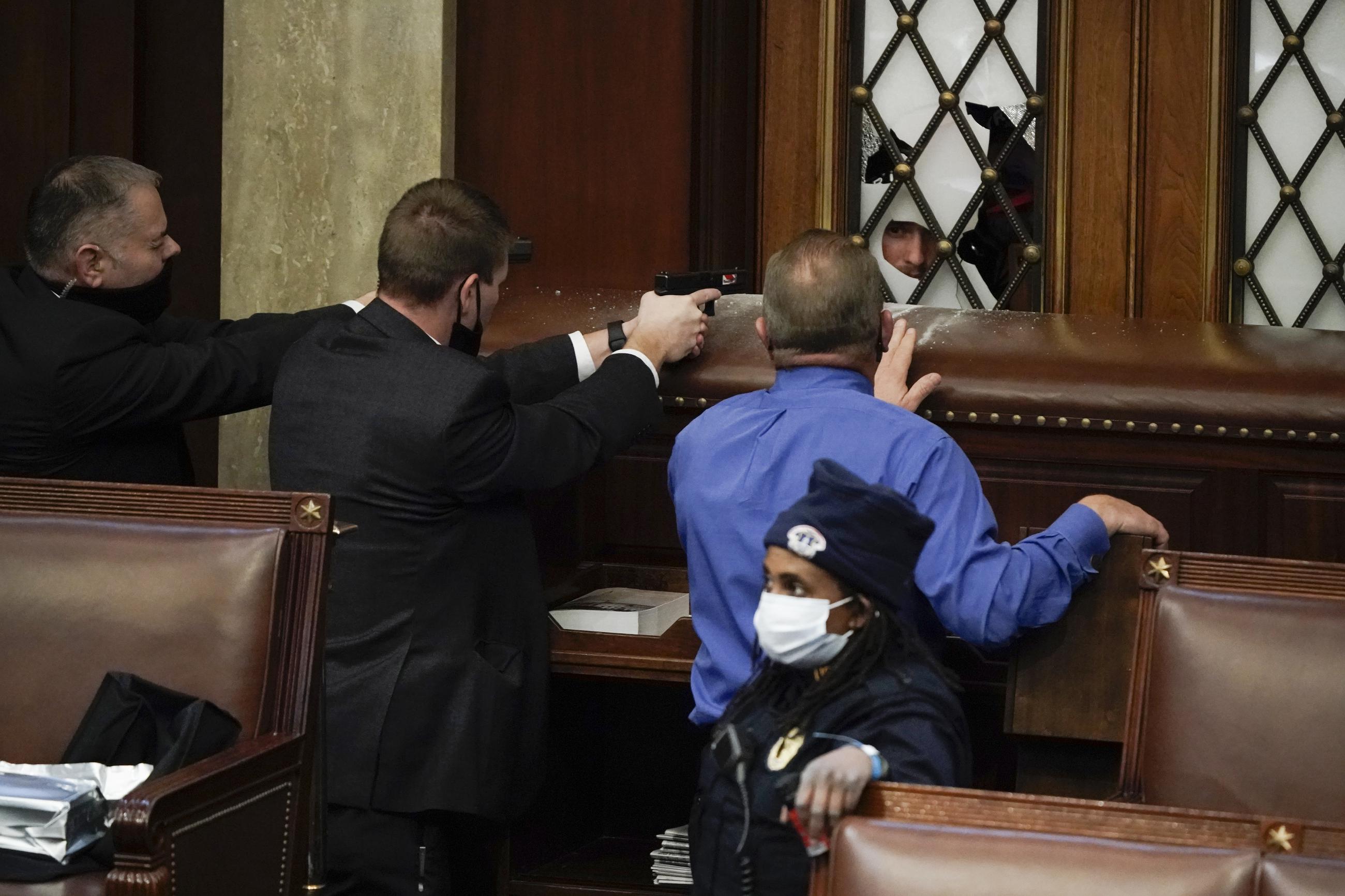 Police with guns drawn watch as protesters try to break into the House Chamber at the Capitol on Wednesday.
AP Photo/J. Scott Applewhite
Add to Briefcase
Casey Wooten @Casey_J_Wooten

There were only a few members left in the House chamber when Capitol police dragged an empty bookshelf in front of the central door to the floor, barricading rioters from breaking though.

Members, staff, and press were already filing out after Capitol police warned the chamber that rioters had breached the Senate side of the building and were making their way across. It wasn’t long before those inside the House chamber could hear rioters banging on the door. Four Capitol police pressed their body weight against the bookshelf in a last ditch effort to keep whatever was on the other side from entering.

Over the span of no more than 10 minutes on Wednesday, what was already a historic testing of American democracy descended into chaos, something darker than the bitter debate already raging in the Capitol and across the country about lawmakers opposing electoral college results.

Inside the House chamber earlier that afternoon, tensions were already running high when Rep. Paul Gosar, the conservative Arizona Republican who objected to his state’s Nov. 3 vote tally, began his speech blasting what he described as voting irregularities, repeating the president’s false accusations against Dominion voting machines.

Capitol police rushed onto the House floor, whisking away House leadership. The doors to the House floor were closed and locked. A Capitol police lieutenant took the House rostrum, informing members that rioters outside had breached the Capitol building and were making their way from the Senate side to the House side. If need be, he said, members could take shelter by ducking under their chairs.

Despite the officer’s direction, confusion remained. Lawmakers tried to restart debate over the objection to the Arizona vote tally. After police deployed tear gas in the Capitol rotunda, staff made another announcement for members to take out the vacuum-sealed gas masks stowed away under each seat and prepare to evacuate.

There were sporadic outbursts from House Democrats to their Republican colleagues across the chamber floor, admonishing them and the president for the effort to overturn the November elections and the stream of misinformation emanating from the White House.

“You did this!” shouted one Democratic lawmaker.

“Call Trump, tell him to call off his revolutionary guard!” Rep. Steve Cohen, a Tennessee Democrat, yelled from the second floor viewing gallery, where members had spread out for social distancing.

House members began to clumsily unwrap their gas masks, which kicked to life with a whiff once removed from their plastic shells. They weren’t exactly masks, more like plastic bags with an air filter and a small pump. House press gallery staff said they’re good for only about two minutes, just enough to escape the building, and not particularly effective against smoke.

Outside the House floor, the mob approached, faint shouts could be heard, and murmurs among lawmakers—now beginning to show real anxiety—escalated.

Rioters had pushed their way across the Capitol, through the rotunda, and had breached a line of officers on the House side. They had already posted themselves outside of the Senate chamber. Now they were at the door to the House floor. 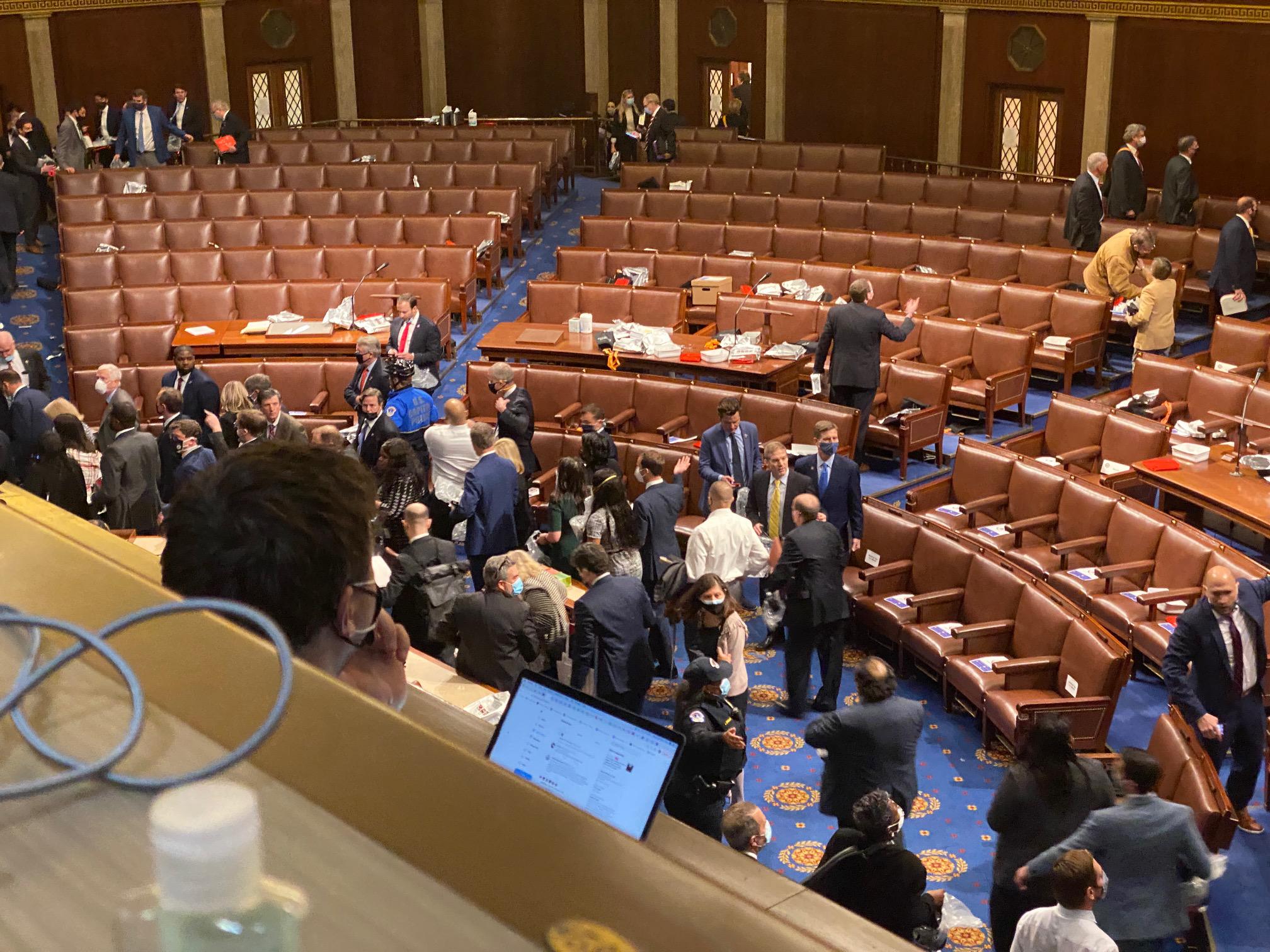 House members flee the chamber as rioters lay siege to the Capitol on Wednesday. Casey Wooten

Any pretense that the work of Congress was going to continue faded away as Capitol police, now rushing back and forth across the House floor, began to evacuate members through the west side of the House chamber.

On the Democratic side, Rep. Jimmy Panetta and Ruben Gallego directed confused members how best to exit the chamber. Several Republicans assisted lawmakers on their side.

Members of the media were gathered in their usual spot, on the second floor viewing gallery above the House rostrum. It’s where the press can view proceedings on the House floor, but is now only used for special occasions, for things like State of the Union address and the swearing in of members that took place only this Sunday.

Most members of the press wouldn’t have bothered to even show up for the counting of Electoral College ballots, had President Trump and allies in Congress not embarked on a no-shot bid to overturn the ballots in Arizona, Pennsylvania, and other swing states Trump has falsely said are the target of a vast conspiracy to keep him from a second term.

The House press gallery informed the media there that they were likely to be locked inside the chamber, and later handed out their own stash of gas masks that had been stored for years in black bags plopped on top of filing cabinets in the gallery office. Staff and press members walk by them every day, never thinking they’d have to use them.

The banging escalated into crashing glass, and circular holes started appearing in the frosted glass windows seated into the doors.

Capitol police drew their pistols and pointed at the holes made by the rioters. It devolved into a standoff, with police trying to convey the futility of whatever those on the other side were trying to accomplish.

“This is our America,” a rioter shouted though one of the holes made.

By now lawmakers were out of the House chamber. Press members were the last to leave, but joined representatives as they made their way through a service tunnel to the Rayburn office building. Rep. Jason Crow, a Colorado congressman and army veteran, stayed back to direct press as they vaulted handrails in the chamber viewing area to get to the open door that led to an exit.

Many Republicans and Democrats were on their phones either talking to staff or loved ones, stunned and confused about what had just happened.

Capitol police cleared the rioters from the building, but the effect of Wednesday’s events will reverberate long after the glass, debris, and blood—one woman was shot and killed inside the building—is cleaned.

Some members, who for weeks have fomented unrest among the president’s base over the election results, appeared chastened by the experience.

“Please people; no violence,” tweeted Texas Rep. Louie Gohmert, who had said on Newsmax on Friday that violence may be the next recourse if the courts don’t overturn the election. “That only hurts our cause.”

In a video released Wednesday afternoon, President Trump told rioters to “go home,” though he made time to characterize his election loss as fraudulent. 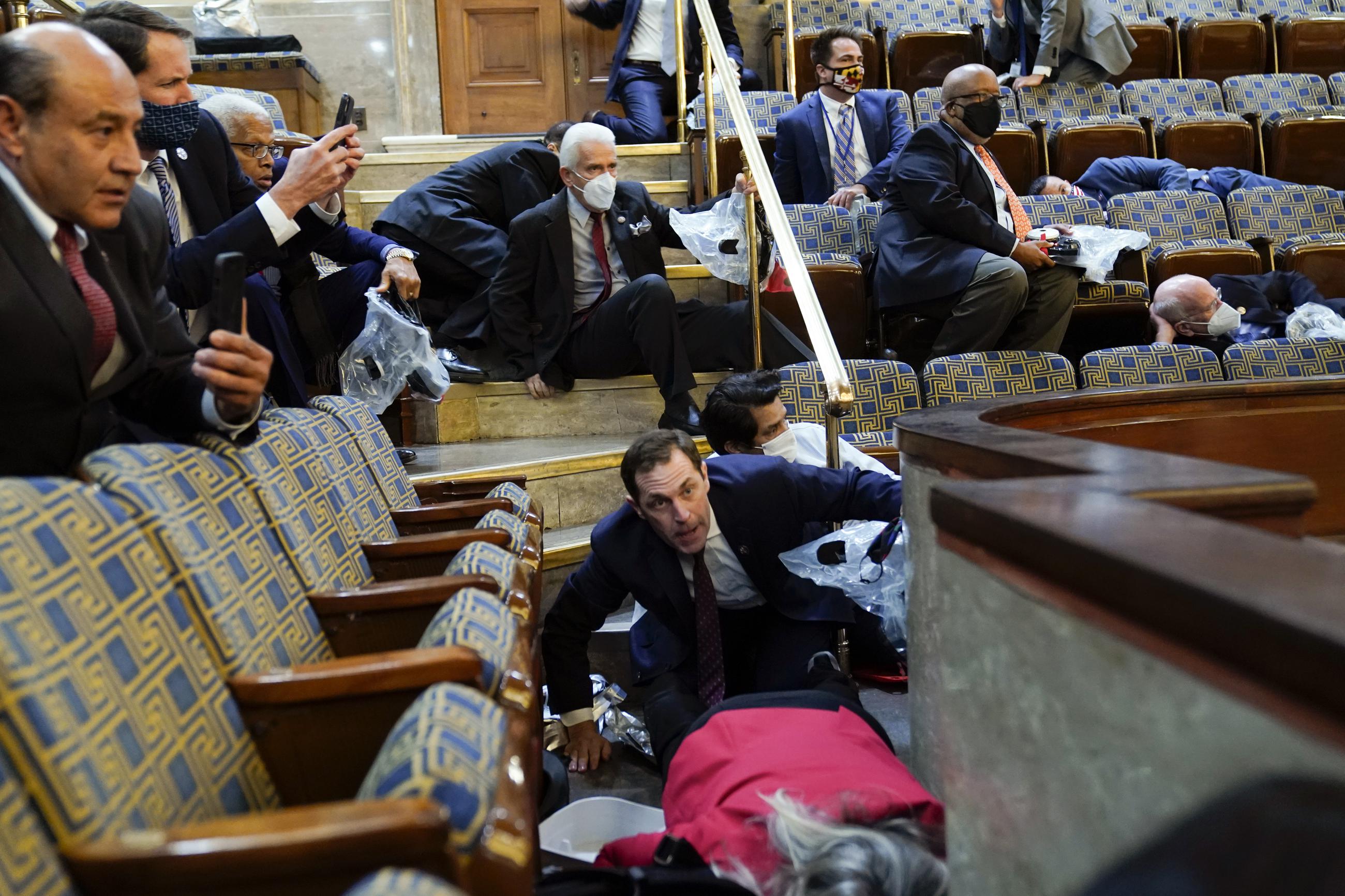 People shelter in the House gallery as protesters try to break into the House Chamber on Wednesday. AP Photo/Andrew Harnik
Share Tweet Email 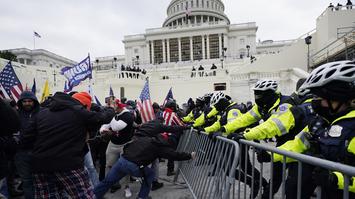 Lawmakers condemn ‘a coup attempt’ at the Capitol

As the mob breached the building, members of Congress sheltered in place and evacuated to more secure locations in the complex. 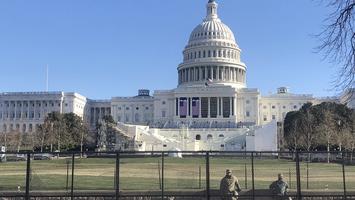 After a dark week on Capitol Hill, Democrats plot the fallout for President Trump. 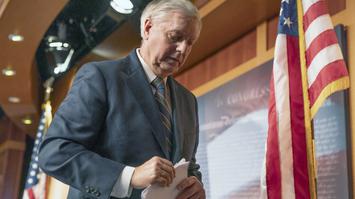 Trump’s impeachment trial would be the first against a former president. That’s a no-go, some Republicans say.

Rep. John Ratcliffe continues to pick up support from lawmakers previously cool to his qualifications as he seeks confirmation to be director of national intelligence.

Will Haspel Split the Intelligence Committee?

The panel has tried to put on a bipartisan face, but reaction to the CIA director nominee is mostly falling along party lines.

Opponents say the label will impede the delivery of lifesaving aid to Yemen.