Look for Biden's congressional experience to set the tone

It's been decades since a president had nearly as much congressional tenure as the president-elect. With government closely divided, it's going to be an asset.

The other day I heard a former career diplomat recalling the transition in 1988, the last time a vice president was getting ready to assume the top job. Vice President George H.W. Bush had been elected to succeed President Reagan and, as some pretty substantial personnel changes were taking place, the message coming from the transition team was that this was the beginning of a Bush I administration, not Reagan III.

Similarly, those expecting President-elect Joe Biden to preside over what amounts to a third, nonconsecutive Obama term are likely to be sadly disappointed. As vice president, Biden pretty much kept his differences with President Obama out of the public view, as is appropriate, but anyone who thinks that Biden will be anything but his own man hasn’t watched him closely. During the campaign, President Trump and his allies argued that if elected, Biden would just be a figurehead, that the likes of Elizabeth Warren, Bernie Sanders, and the “Squad” would actually be running the administration. Those folks are mistaken as well.

Given that he’s observed plenty of right and wrong up close by Richard Nixon, Gerald Ford, Jimmy Carter, Ronald Reagan, Bush Sr., Bill Clinton, George W. Bush, Obama, and now Trump, he has developed some pretty firm ideas of what should be done—and how. If ever an incoming president were immune to the effects of an abbreviated transition, one with little or no cooperation from his predecessor, it would be Biden. It will be a nuisance and make things a bit rougher, but this is not likely to be insurmountable.

My wife calls me a pathological optimist, but my view is that the stars may be lining up just right for a bit of stability for the next two or four years, coming after a pretty tumultuous four years. Even if Republicans can hold onto one or both of their Georgia Senate seats in the Jan. 5 special elections—which might actually be just a 50-50 proposition—it would give them only a bare Senate majority, nothing close to “control” of the chamber. And while Democrats will have a House majority, it will be the narrowest since World War II. Neither party will be able to pass heavily partisan or ideological legislation. Sure, those on the Far Left and the Far Right can play the role of saboteurs, but anything more exotic than lowest-common-denominator policy proposals is not likely to get past both chambers.

It may seem appropriate that a president-elect turning 78 on Friday could have a bit of a retro presidency, but the upcoming administration may hearken back to a previous era of chief executives. Think about the last 60 years. From John F. Kennedy’s tenure in the White House through Lyndon Johnson’s, Nixon’s, and Ford’s, a span of 16 years, all four Oval Office occupants were former House members and three had served in the Senate as well. One had been a Senate majority leader, another a House minority leader, and two had presided over the Senate as vice president. In all, the group had spent roughly 78 years serving in Congress.

That meant time spent understanding the institutions, the process, and policy developed from the other end of Pennsylvania Avenue. It also meant relationships and friendships, not just knowing many of the key players but understanding their strengths, weaknesses, and foibles.

Among the seven presidents who served over the last 44 years were four governors—Carter, Reagan, Clinton, and George W. Bush—who had executive backgrounds but not a day of congressional experience. Another, Donald Trump, arrived without a day of governmental employment at any level. The two who did have time in Congress, George H.W. Bush and Obama, had only eight years between them—though, in fairness, Bush’s time as United Nations ambassador, Republican National Committee chairman, CIA director, and vice president certainly should count.

It is interesting to consider that while Biden came to the Senate 12 years before Mitch McConnell was first elected in 1984, their 24 years of service together led Biden to be known inside the Obama administration as “the McConnell Whisperer.”

To be sure, Trump’s petulant refusal to concede is forcing a bit of a kabuki dance, particularly for McConnell and GOP members, to pretend that the election either didn’t happen or has yet to be resolved. Not to sound like Pollyanna, but once that’s resolved, there really is a chance for at least a brief period of moderate stability and measured governing, simply because, for once, neither party is in a position to go too far. Any coalitions will have to be built from the center out, not from the left or right in. 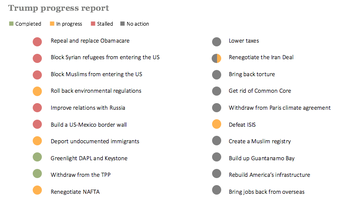 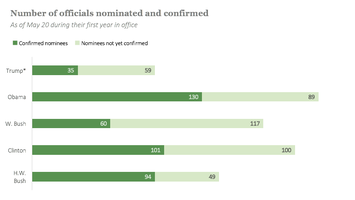 Trump slower to nominate staff than his predecessors 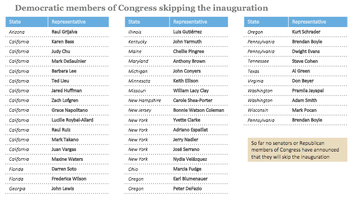 Who is skipping the inauguration? 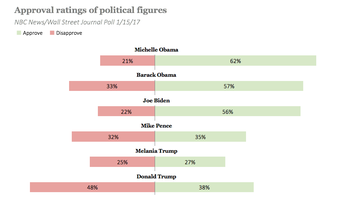