The Democratic Convention won't be 'brokered.' But it will be interesting 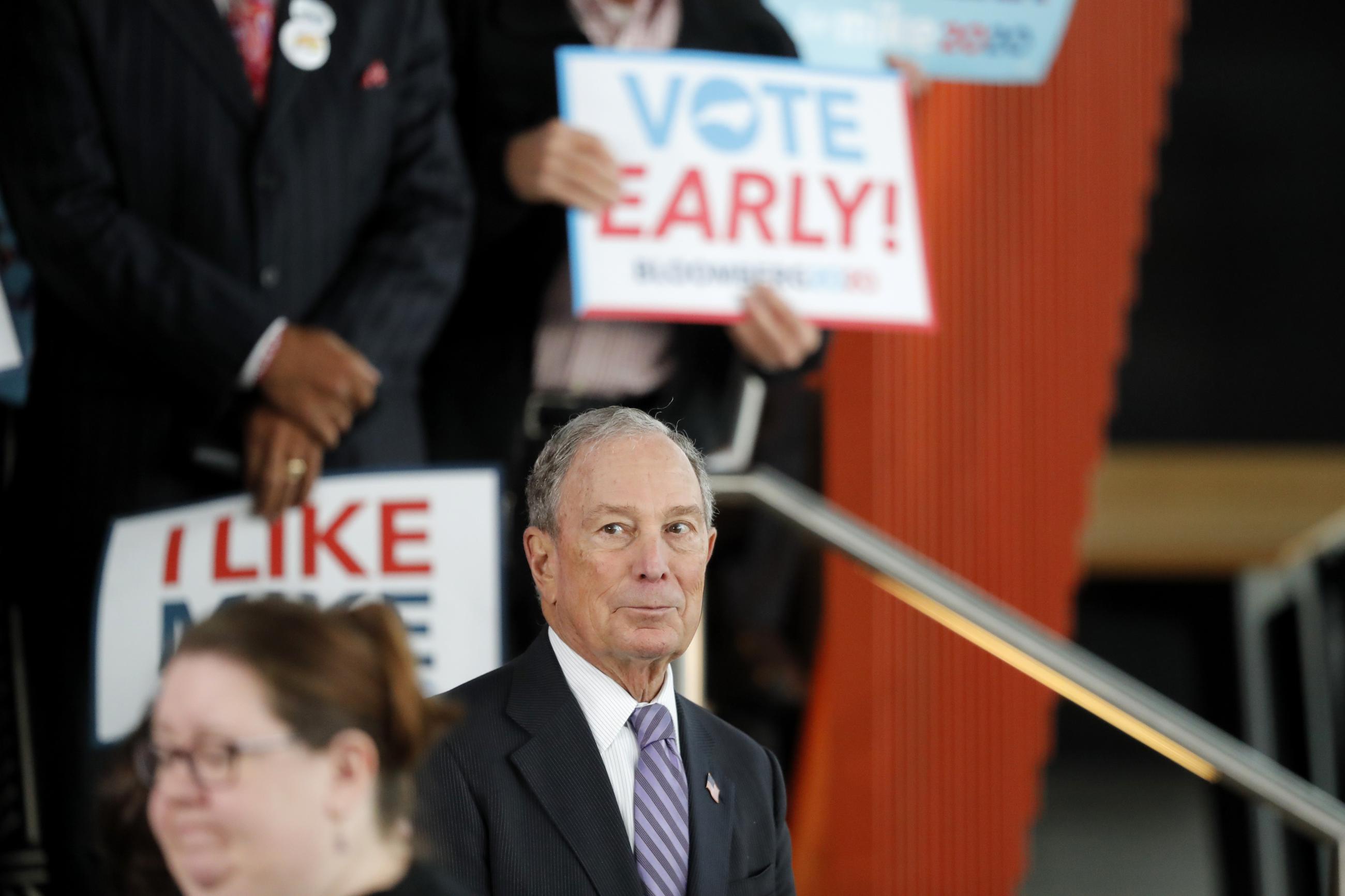 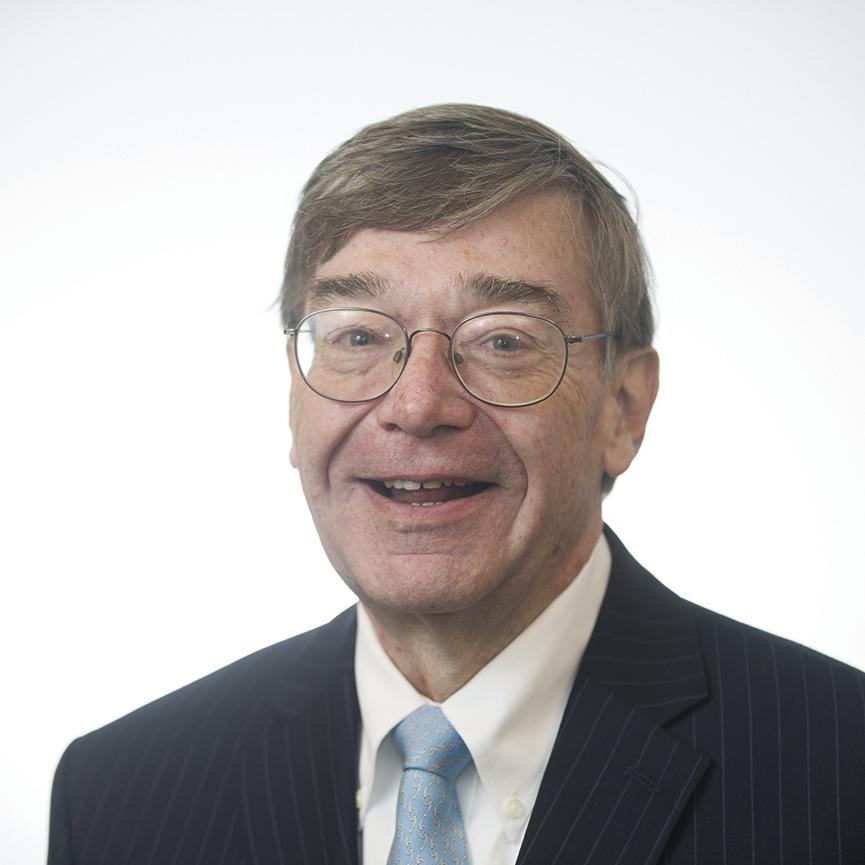 The chances are real and increasing that as of June 3, the day after the final primaries are held, no candidate has a bare majority of at least 1,990 delegates. At that point it comes down to who has the most delegates, how large their lead is, and whether there is there a critical mass of adamant opposition to deprive that leader of the nomination. It then comes down to a second ballot, in which the 771 superdelegates of elected official and party leaders can participate. This, in my totally subjective view, is when the adults are allowed to enter the room. At that point one might ask, what direction might most of those 771, mostly establishment-oriented super delegates go?

But that’s far off at the moment. Of more immediate concern is the Nevada Caucus and the South Carolina Primary, the red-headed step-children of the early states, sandwiched between Iowa and New Hampshire on one side and the 14 Super Tuesday states coming immediately after. There is much less of an aura around these than in the first two, in part because Nevadans and South Carolinians are new to the early state game. Fewer voters understand what their role is supposed to be—kicking the tires, so to speak, going out and listening to candidates, asking questions to size them up. Veteran Republican pollster Neil Newhouse points out that many primary voters really don’t focus on their choices until late in the process, so their initial feelings not particularly representative of what they might be on caucus or election day. In short, Super Tuesday will likely overshadow Nevada and South Carolina.

There is a good case to be made that Sen. Amy Klobuchar is close to the perfect Democratic nominee. In her profile and ideological positioning, it’s hard to find any deal-breakers that would cast grave doubts on her electability. Her challenge is that she got her break in this race too late to really capitalize on it. She needed a turbocharge in her momentum before the Iowa Caucus, when she still had time to scale up a national campaign to be able to compete on Super Tuesday. But fifth place showings in both the delegate count and popular vote seemed to put an end to that.

But her impressive New Hampshire debate performance proved otherwise. That strong delivery coincided with two other developments—Joe Biden was collapsing, freeing up a block of moderate voters, while Warren was also fading, putting a bunch of women voters up for grabs as well.

We have seen this happen before: A long-shot, underfunded campaign gets a big break, money starts gushing in, but it’s so late that the money cannot be spent efficiently or effectively. It’s like a parched person suddenly being offered a drink out of a fire hose. Scaling up from a low-budget, low-overhead, small staffed long-shot campaign to a national effort capable of mounting a strong campaign in all 14 Super Tuesday states and beyond is extremely difficult. You have to have people to hire people. Campaign organizations are not plug and play, they need a little lead time. Is there time for her to scale up? Maybe. But it reminds me of Gary Hart taking on Walter Mondale for the 1984 Democratic nomination. He had little money, then when the big breaks came and the money finally arrived, it was too late to do a lot with it.

Speaking of “too late,” let’s turn now to Biden and South Carolina. Biden had run unusually strong among African Americans, which led conventional wisdom to view the first state with a large black constituency as his “firewall.” But with Biden’s candidacy in a free fall, there are surveys indicating that he is dropping among black voters as well. Look for the black vote there and in subsequent state to splinter. There is no one left who has any particular claim or appeal to black voters; indeed there are arguments to be made against each of the surviving candidates getting a disproportionate share of the black vote.

Among them is Michael Bloomberg, who supported controversial “stop and frisk” policing policies as mayor of New York. No doubt this is a problem for Bloomberg, but remember: It wasn’t long ago that people were saying that Biden would have a problem among black voters because of his sponsorship of the 1994 crime bill, with its “three strikes and you’re out” provision.

Furthermore, the roster of black current and former mayors endorsing Bloomberg grows longer every day? Might that suggest the problem is either over-stated or that they could run interference in the black community for him? Bloomberg built a lot of relationships when he was mayor and active in the U.S. Conference of Mayors, and he’s remained active on urban issues since leaving Gracie Mansion.

Close readers of this column know that since November, may hunch has been that Bloomberg was under-rated. The obsession with beating Trump is so great among about 60 percent of Democrats that for the first time, they’re looking at the whole electability thing in a way they never have before and maybe never will again. Under no other circumstances would a Wall Street billionaire who skips the first four states have any chance of winning a Democratic nomination. But this may be where we are.

It reminds me of Arnold Schwarzenegger’s election to the governorship of California in 2003. In no other way than a recall election could he have been elected governor. But sometimes circumstances trump the political laws of nature. Of course for Bloomberg, money helps him defy those laws of nature: On Thursday, Advertising Analytics showed that his broadcast and cable television buy had reached $363,431,296, almost $6 million more than the day before. This is an interesting race. 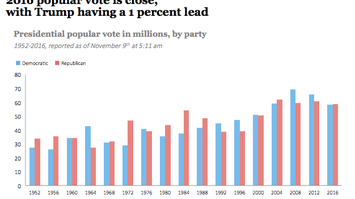 Voting trends in the popular vote 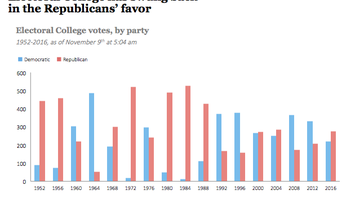 Voting trends in the Electoral College 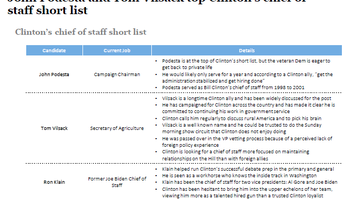 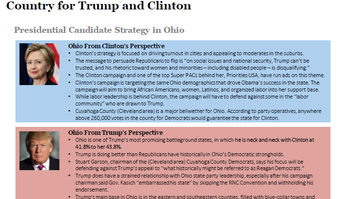 Battleground state: Ohio is one of the closest races in the country for Trump and Clinton

It's not just money that's on his side. It's delegate math and a relatively weak field of opponents. 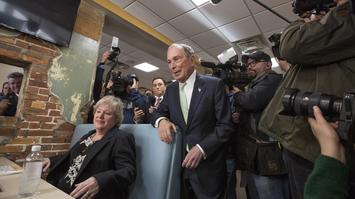 Our Usual Assumptions No Longer Apply

There are plenty of reasons why Michael Bloomberg shouldn't win the Democratic nomination. But we can find historical reasons to exclude every other Democrat in the running, too.