Kansas enters the fray, but the top seven remain steady. 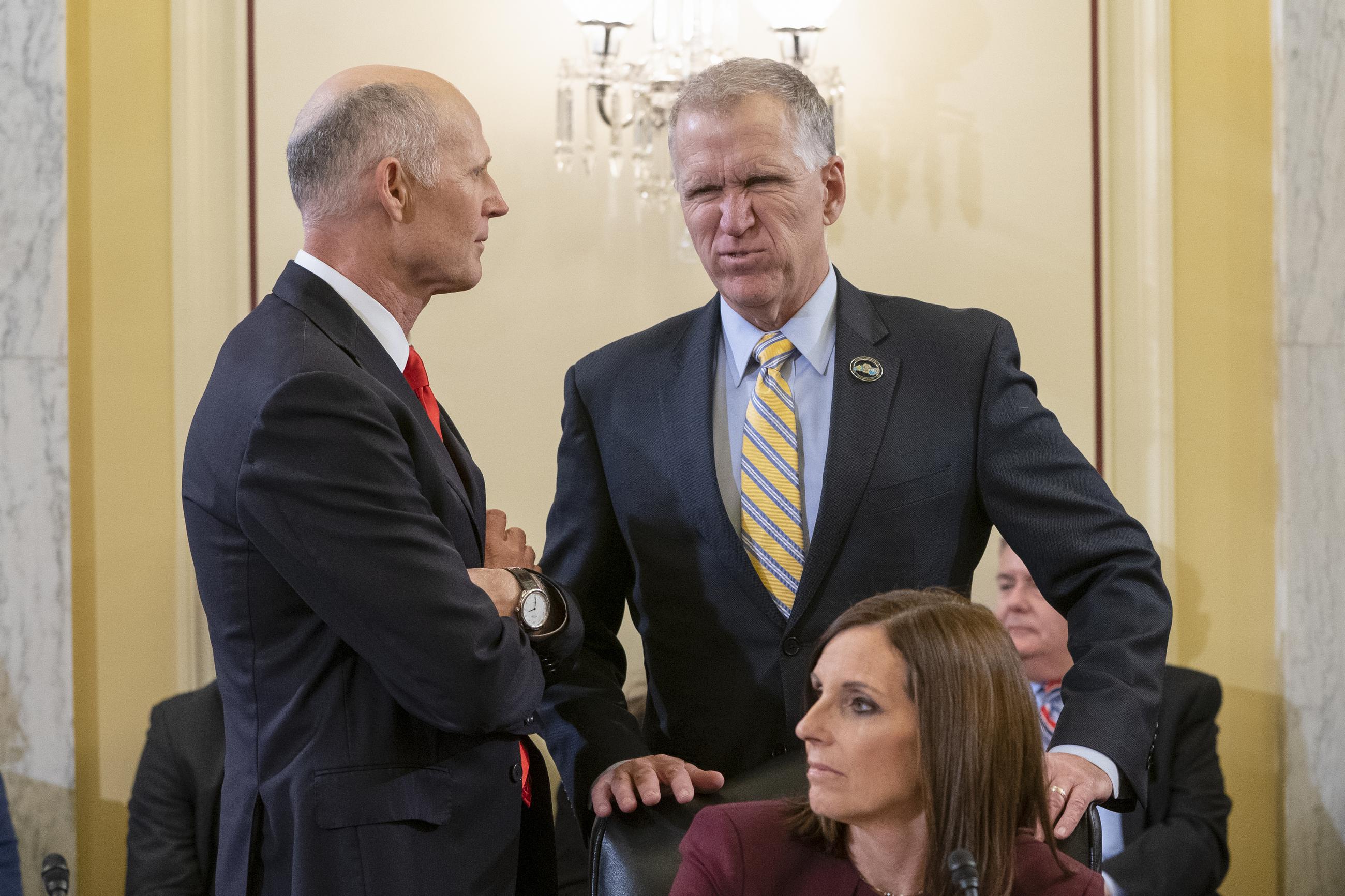 On the surface, the fate of the most vulnerable senators hasn’t changed much since Hotline’s last power rankings. But there are signs of momentum changes that may take root—or fizzle out—as 2020 begins in earnest.

Democratic Sen. Doug Jones tops the list again, as his prospects have only worsened. Republican Sen. Thom Tillis avoided an expensive primary in North Carolina but remains more vulnerable than Sen. Susan Collins in Maine. Collins is in a weaker position than in previous races, but she doesn’t have to win by double digits like she has in the three previous elections; she’s still safer than Tillis and Republicans in Colorado and Arizona.

Now that Mike Pompeo has decided not to run for Sen. Pat Roberts’s open seat, Kansas makes an appearance. And with the discord surrounding Kelly Loeffler’s appointment to the Senate, the Georgia special election moves up, too.

Here is Hotline’s ranking of the seats most likely to flip, with the race’s placement in our September ranking in parentheses.

With Jeff Sessions’s entry, Jones’s best chance for holding his seat—Republicans renominating Roy Moore—is slipping away. Sessions will likely face a runoff against former Auburn University football coach Tommy Tuberville, who has recently shaken up his campaign team. Rep. Bradley Byrne, placing third in most polling, committed to going on-air early in an attempt to introduce himself to voters outside of his district. As of now, it's hard to see where Jones pulls together the numbers to win against any of them.

The new year has brought little relief for Gardner, who has faced a barrage of ad buys from Democratic groups. Gardner is also facing a vote on impeachment and hasn't strayed from the party line on President Trump. Former Gov. John Hickenlooper, the likely Democratic nominee, held a large margin among unaffiliated voters in recent polling, a group that just hit 40 percent of the state's electorate. But the Democrat faces a crowded primary, as well as the cloud of a pending ethics hearing.

Money remains a problem for McSally, even as she’s kept pace with the top GOP fundraisers. She raised $4 million in the fourth quarter, but has been repeatedly outraised by retired astronaut Mark Kelly. In December, McSally reportedly told state Republicans in the state that she's praying for outside spending to defend her campaign amid an onslaught of Democratic ads. Kelly slightly leads in recent public polls, including among independents. But McSally's saving grace may come from the Trump campaign’s plans to spend heavily in the swing state.

Last year saw a glut of ads and cash start to flood the Pine Tree State, and there's little indication the frenzy is slowing. State House Speaker Sara Gideon outraised Collins in the third quarter, $3.2 million to $2 million, as both campaigns—and a handful of outside groups on both sides—took to the air. The Republican's approval numbers have dropped ahead of a tough road with impeachment. The nomination isn't a lock for Gideon, however, as former Google executive Ross LaJeunesse jumped into the race in November. His willingness to spend his own money—more than $300,000 as of the end of the year—could complicate Gideon’s path.

The Democratic presidential caucuses have taken precedence, but the race against Ernst won't remain under the radar much longer. The Republican has chosen to highlight state-specific battles she's fought on the campaign, but she’s also been tarred by allegations of coordination with an outside PAC (which the campaign denies). Former House candidate Theresa Greenfield announced raising $1.6 million in the fourth quarter, kicking off 2020 with more than $2.1 million on hand. But a December poll from a pro-Greenfield group still put the Democrat 6 points behind.

John James, the likely GOP nominee, has the luxury of being the only Republican in the country running in a state that’s a credible pickup opportunity—other than Alabama, which Republican donors might be able to ignore in the general election. James has seized upon his party’s enthusiasm, outraising Peters in the final two quarters of 2019. But James’s success depends on Trump’s margins in Michigan, which could ultimately help Peters.

Appointed Sen. Kelly Loeffler is a first-time candidate and has drawn skepticism from conservatives. Rep. Doug Collins, a Trump favorite, still hasn’t ruled out a candidacy. A divided Republican Party would face longer odds of holding the seat. That said, Democrats are facing their own divisions. They are eyeing two candidates: DeKalb County district attorney Sherry Boston and the Rev. Raphael Warnock. But Matt Lieberman, the son of the former Democratic senator, raised a respectable $700,000 in the fourth quarter. And former U.S. Attorney Ed Tarver expressed interest in the race last week. If Democrats can’t clear the field for their pick, it’s hard to see them defeating Loeffler—or any other Republican.

Kansas might not need a Democratic wave in order to elect a Democratic senator. Rather, Democrats need the national environment to take a back seat to the individual candidates—and for Kris Kobach to be the GOP nominee. Without Mike Pompeo in the race, Republicans are searching for an alternative, which will likely be Rep. Roger Marshall. Both Marshall and Kobach appealed to Trump on Monday for his endorsement. But if the GOP field remains crowded, Kobach can win the nomination with a plurality and lose the general election in a repeat performance of the 2018 gubernatorial race. Still, a desire for a GOP majority in the Senate could override voters’ concerns about Kobach.

If relatively generic Republican incumbents like Perdue and Cornyn are losing their seats, it’s probable that Democrats are winning back the Senate and White House, and expanding their majority in the House and on the state level. That said, presidential-year turnout could boost participation from young and nonwhite voters, while Beto O’Rourke and Stacey Abrams establish an infrastructure to turn out the base that didn’t exist in 2018. But the Democratic primaries seem unlikely to produce superstar candidates, and there’s not yet evidence that Democrats can win statewide. 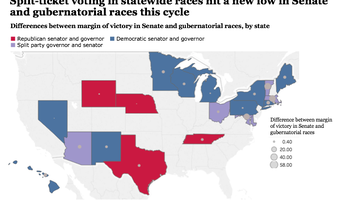 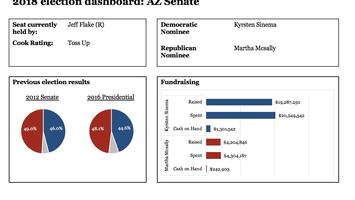 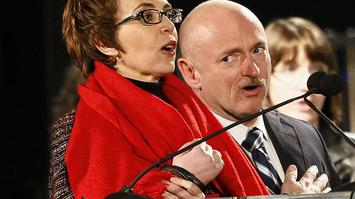 Democrats Seeing Stars for the Senate 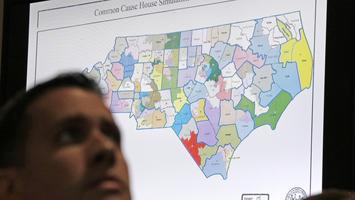 The Democratic electorate isn't paying much attention yet, but strategists say only one primary campaign seems ready for the general. 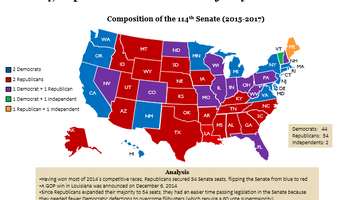 Composition of the 114th Senate 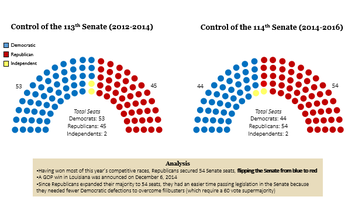 Control of the 114th Senate