Friday’s attack shows how the insurrection will have a long-reaching impact on efforts to keep the Capitol complex safe.

In the span of three months, nine people have died as a result of violence at the U.S. Capitol.

Four civilians died on Jan. 6, three of medical incidents and another after being shot by Capitol police. USCP Officer Brian Sicknick died after apparently being attacked by rioters. Two officers, one from the Capitol Police and another from the D.C. Metro Police, died by suicide shortly after enduring the Jan. 6 seige.

On April 2, a 25-year-old man struck USCP Officer William “Billy” Evans and another officer with his car while attempting to ram through a Capitol barricade, killing Evans. The attacker was shot and killed by police when he lunged forward with a knife, Capitol Police said.

The Jan. 6 attack and the 89 days that have followed have been a tragic period for Capitol Hill, as lawmakers, staff, and the Capitol’s police force grapple with what is already one of the deadliest years in the institution’s history. Lawmakers and officials have been working on security upgrades at the Capitol, but Friday’s incident has brought into stark relief both the need for substantial renovations to Capitol security and an overhaul of the Capitol Police department.

“Yeah, this rips the scab off and continues to provide a level of uncertainty and worry about the workplace and what's happening there,” Rep. Tim Ryan, chairman of the Appropriations subcommittee that funds the Capitol police, said during a Friday call with reporters.

Ryan and other lawmakers are working on an emergency supplemental funding bill that would fund some of the recommendations made by retired Army Lt. Gen. Russel Honoré’s report on Capitol security commissioned by House Speaker Nancy Pelosi after Jan. 6.

In a Sunday interview on ABC’s This Week, Honoré pressed Congress to act on his recommendations in light of the latest attack.

“We’ve given them the plan, we worked the plan hard, now it’s time for Congress to work the plan,” he said, adding that the Capitol was “absolutely” becoming a bigger target for those looking to act on grievances with the government.

Honoré’s report recommends hiring hundreds of new personnel, most pressingly 233 staff to fill current vacancies. The lack of personnel has led to high rates of overtime and has undercut the department’s ability to train existing staff, the report found.

The report also recommends lawmakers authorize 350 additional hires to reduce overtime costs, and authorize hiring 424 intelligence specialists, operational planners, dignitary protection agents, and other specialized personnel “to fill assessed capability gaps.” The report makes a number of other recommendations, including the establishment of a dedicated quick-reaction force for the Capitol, consisting either of National Guard or law enforcement personnel, and revising existing law to give the USCP chief the authority to unilaterally call in the National Guard.

Police union chairperson Gus Papathanasiou has urged lawmakers to implement the recommendations contained in Honore’s report, warning last week that younger officers had told him they were looking to leave the department. Acting Police Chief Yogananda Pittman and other USCP leadership received a vote of no confidence from the police union in February, and negative reviews on hiring sites often cite poor management. Ryan said last week that it takes about 18 applicants to get a single new USCP member.

“We want to increase the Capitol Police staffing by close to 1,000 new police officers, and that’s going to take some time,” Ryan said. “I think the big question for us is … how do we get ourselves in a position where the Capitol is hardened, where we have the manpower that we need, where we’ve extended the perimeter out—not necessarily with the fence, but with cops walking the beat—how do we beef up our intelligence to make sure that we catch this kind of thing, if we can, well beforehand, to foil the attack?”

Honoré’s report notably did not recommend the establishment of permanent fencing around the Capitol. Instead, the authors suggested the USCP and the Architect of the Capitol contract with the Army Corps of Engineers to create a “mobile fencing option” that can be easily erected and deconstructed.

“We’ve given them the recommendation: The Corps engineer is standing by to reinforce the outer grounds of the Capitol, with contractors coming in to put advanced fencing that could come out of the ground as required,” Honoré told ABC.

“I think the permanent fencing should come down,” Senate Rules and Administration ranking member Roy Blunt said during an interview Sunday. “I don’t think it does the job. In fact, the fencing was right there when the car drove through. … Frankly, we’re probably preparing for the wrong thing. The idea of 'what happens next at the Capitol will be what happened last' is almost certain not to be the case.”

In mid-March, Senate Minority Leader Mitch McConnell said he was “extremely uncomfortable” with the high level of security at the Capitol, likening it to “my last visit to Kabul.” Senate Majority Whip Dick Durbin has called the razor-wire-topped fencing “ghastly.”

Ryan has preached caution about prematurely removing the fence, however.

“Nobody wants that there,” Ryan said. “But the question is, is the environment safe enough to be able to take it down? And in the meantime, maybe that fence can prevent some of these things from happening.”

Honoré’s report is likely to be influential among Democrats who are crafting a $2 billion security package. There is no public timeline yet for the supplemental, but appropriators are set to ramp up work on appropriations bills when they return from recess next week.

Lawmakers allocated $424 million for Capitol Police salaries in 2021, an increase of 12 percent over last year. The police also received $91 million in general-expenses funding, including $46 million for maintenance and security upgrades to Capitol security facilities.

Lawmakers are separately pushing legislation that would set up offices within the Homeland Security Department, the FBI, and the Department of Justice to monitor, investigate, and prosecute cases of domestic terrorism and coordinate with local law enforcement. The House Homeland Security Committee has also called law enforcement officials to testify on amending existing domestic-terrorism laws. Some law enforcement officials have argued that charging domestic terrorists using other federal statutes—like those for hate crimes and attempted murder—sends the wrong message.

“Labels matter,” Michigan Attorney General Dana Nessel told the Homeland Security Intelligence and Counterterrorism Subcommittee last month. “Prosecuting hate-motivated attackers as terrorists sends the clear message that the threat of extremism is just as significant when it is based on domestic political, religious, or social ideologies as it is when it’s based on violent jihadism.”

The Office of the Director of National Intelligence released a report in mid-March assessing that that “racially or ethnically motivated violent extremists (RMVEs) and militia violent extremists (MVEs) present the most lethal [domestic violent extremist] threats,” with MVEs being the most likely to target law enforcement and government personnel and facilities. The police have not announced the motive of the suspect in the attack last week, a 25-year-old Black man from Indiana.

“For much of the time that I’ve been serving there the last decade, I’ve assumed that it was a place that international terrorists might target again someday,” Sen. Chris Coons told MSNBC on Monday. “Just in the last year, it’s become a place that I’m more and more concerned is a priority for domestic terrorists.”

Before this year, four USCP officers had died in the line of duty, including two who were shot in 1998. Lawmakers overhauled security infrastructure at the Capitol after 9/11, including by funding the retractable vehicle-barrier system that stopped the assailant’s car last week. 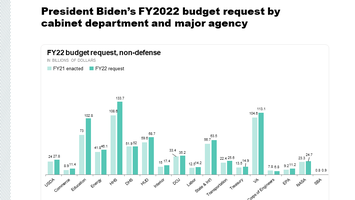 Breakdown of the FY2019 budget request by category

Congress Thinks This Statue Is a Threat to National Security

The House passed legislation this week to prevent a statue from being erected in front of a federal courthouse in Alabama due to security concerns. 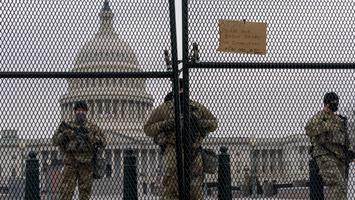 An expanded perimeter and more police are among proposed changes as the House awaits comprehensive recommendations from retired Lt. Gen. Russel Honoré.